Student Tiffany: On the first Friday of my work experience, I was able to go to the Avenue Campus of Northampton University, where I, along with others was able to record a show for the UonTV  at the Uni. It was a very cool experience, as we got to go into their studio which was set up with lots of cameras and even a green screen. We also got to read off a Autocue which was sometimes very amusing as it would go to fast or too slow (depending on who was operating it) which ended up us losing words! Ha ha. It was also really interesting to see how all the clips went together. Altogether a very cool experience. 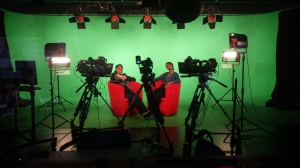 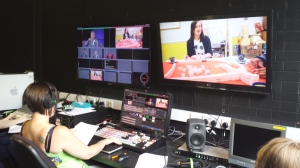 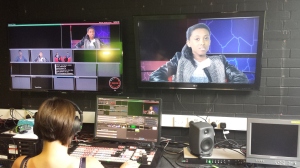 Student Emma: At The Northampton University I was given the opportunity to use film cameras, a green screen room and auto-cue equipment and see how television is made behind the scenes. Even though learning how to use the equipment was quite complicated, I found it really interested, and enjoyed the challenge and problem solving. 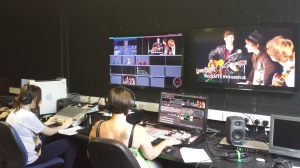 Student Caitlin: At Northampton University we had a good opportunity to learn about how a tv show is made, and how the equipment used works. I worked on the sound equipment for the microphones and the video clips used in the show, and also learnt how to use the auto-cue and do editing. It was a valuable experience to have, as it gave me a good insight into how a tv show operates. it also tested my skills in working as part of a team, because everything had to be done in union, involving a long of intercommunication and good timing.

This week we’ve had young people in The Movie Hub on work experience from Northampton Academy. This is what they said:

Emma: During my work experience at Reelscape I got to learn how to use sound recording equipment, and then use it behind the scenes of a real film being recorded. This was a really great experience, because I got to experience what it’s like behind the set of a film and how the director works. I also saw how the staff worked together as a team to produce the content of the film. It was also interesting to see how long it takes to record a short piece of a film, and how many roles there are, besides being the actors or the director. I believed this helped me gain a greater understanding of how film is created.

Tyra: I have been challenged with many activities in the Hub and also got to try and work in an environment many aspiring film workers would like to be in. This includes shooting behind the scenes for movies, working with many movie sets, getting in contact with people from film industry and even getting the opportunity to be part of a TV show. This has been a fun few days and I am excited for what the rest of the week entails for me and my colleagues.

Caitlin: My experience at Reelscape over the past week has been incredibly useful in terms of learning about and experiencing the film and television industry. We filmed some behind the scenes footage of the filming of a trailer, which will be used to generate funding for a feature film. Using the equipment, and watching professionals use the equipment, was interesting and helpful for learning about how films are made. It has been a great experience in which I have been able to talk to professionals from the industry and gain a more in depth knowledge on the industry I aim to be a part of.

Tiffany: I am currently at Reelscape at Weston Favell on work experience. For me, the most interesting thing I have done was help on set of a short film by David East on called ‘Enceledus’. I had to help operate a tube that was probing a poor man in bed while his wife got abducted by aliens!! *spoiler alert*. I had to crawl behind the bed and fit into this tiny space and pull the tube down to give the illusion of an alien probing. It was pretty funny, and another actor who was acting as the alien hand pretended to feed it through his nose. Creepy stuff!

So Week One of The Movie Hub was pretty epic. We had our Open Day and gave out lots of application forms, then Safeguarding training where all our new volunteers got to meet each other for the first time. The first workshops took place: Lings, Arbours and Northampton Academy drew up a pretty wonderful ’employment contract’ for us all to work by and rehearsed some key scenes from feature film ‘Fortune Cookies’. We had a read through of Cookies by local professional actors in the Hub earlier this week and the kids’ held up pretty well!